The Anglo-masonic legal business in Australia is corrupt to the core.

The High Court of Australia we have today is not the same one as at the time of federation.

MANY so called ‘legal’ actions are not done so lawfully.

Those in control of the colony have been taking away ‘democracy’ akin to the frog in boiling water analogy and the serfs have done nothing about it.

This year on the 23rd of March marks 100 years since the democratic law making process as described by the constitution was removed with the abolishment of the upper house or the Legislative Council in Queensland.

Of course this was done ‘unconstitutionally’ but that didn’t stop those ‘rascals and outlaws’ in office from continuing their assault on the serfs of Australia.

The Queen of Australia is another legal farce, but hey the legal profession is silent on that one.

Do you know why?

A lawyer is an ‘officer of the court’, where it is in the court’s interest to not draw attention to the lawfulness of the ‘Queen of Australia’ as this will undo the fabric of the legal farce that the foundations of this business built on.

A lawyer’s alliance is called the 3 C’s meaning the Court, Colleagues, Client, where you (the ‘client’ ) are last on the list.

The forging of the nation’s capital is based on discrimination (with the blessings of the ‘motherland’), what a great start for an independent colony.

The call to build Canberra did not go out to ‘all’ town planners but rather only ones belonging to the Freemasons.

Just like with the White Australia policy, discrimination is rife, especially in the legal business especially if you’re a defendant and not a member of the ‘brotherhood’.

Those in charge of Australia have no legal idea of what’s going on that in 1986, two Australia Acts where invented as they didn’t know which one would be legally binding.

When this was going on, the UK’s legal scholars where laughing at Australia being a “legal basket case” which it truly is.

It’s still legally a colony, where those in charge are acting is if it’s a country, where they’re lying to you that it is.

Abuse by those in power is not new here on this land, where in the 1800’s the abuse or rather disregard for the law, was so great that the motherland had to install the Colonial Laws Validity Act in 1865,

NOT a very proud moment for Australia, and a fact not taught in law school.

One would think this was a thing of the past but it’s NOT.

Australia today is a prolific Human Rights abuser that should be in headlines all over the world in order to hold those responsible in the international courts, but alas that is not the goal of the mainstream media.

The media goes on about the actions of other totalitarian states like China or North Korea, but Australia too is a totalitarian state, a fact that has become more visible since the advent of the current global health situation.

The abuse is so overwhelming and overpowering that hardly anyone is prepared to go to the length that Corinna Horvath did.

Not finding a remedy within the boundaries of this colony is a very common occurrence, that the serfs face every day, where to fix this ‘denial of justice’  can last quite literally half a lifetime or your can die trying.

A system deliberately rigged against the accused, but that’s another topic for another day.

The current tennis fiasco is just  that, a fiasco of a nation that has gone rogue.

Attention has been drawn to Australia, but for all the wrong reasons.

While the Danish ‘papers’ have admitted to screwing over the people with the wrong focus on misleading information from the government and not being assertive enough, there’s no such luck in the colony called Australia.

So called ‘journalism’ is dead, where all the publications are ‘people’s’ papers meaning sponsored by the government to spew out government sanctioned propaganda.

How did this journalism die?

By the federal government pissing in the pockets of the publishers, in the form for tax breaks.

That’s right, Australian’s tax dollars are used to lie to them, BRILLIANT! Who would have thought.

The media will allegedly go to great lengths to show you ‘leaked’ or even court documents on the colony’s fiasco with the tennis star.

Australia’s CEO #ScottyFromMarketing dictates from the podium of not the Hillsong cult, but rather the unlawfully created office called the National Cabinet.

You’re not even getting legitimate/lawful instructions with regards to this global event.

Scotty’s ‘blah blah blahs’ from National Cabinet are about as lawful as him chiming to you what to do from the pulpit of his cult.

So why doesn’t the mainstream media report this?

Remember when we used to have a ‘court reporter’ telling us of the important cases?

Now what’s important is some useless slapper’s or rather ‘influencer’s’ tiny bikini pics.

After all, it did report about a Bill to keep National Cabinet a secret didn’t it? 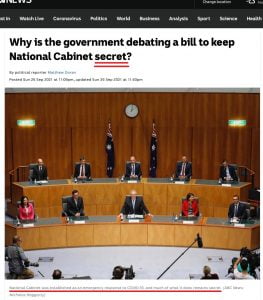 So why doesn’t the ABC follow that story up with the fact that National Cabinet is not legitimate?

The ABC was informed on social media of this fact pointing to the legal documents and said nothing about it, oh except for that the comments are now closed because the ‘moderator resource’ is not available.

What a pathetic cop out!

The Australian people are being conned, misled, subdued and stupefied by the mainstream media, with full support of the colonial government.

Well that’s what you get for not living in a ‘real’ country, e.g. Denmark.

The following legal documents are from constitutionwatch.com.au

See FOI on: NO VALID CREATION OF THE NEW NATIONAL CABINET:

Djokovic’s legal team should take this “basket case” called Australia to the U.N, under the Convention against Torture and Other Cruel, Inhuman or Degrading Treatment or Punishment.