First and foremost, we should comprehend the word journalism as being the reporting of facts irrespective of how ‘hurtful’ they may be and without any political bias, where is this not the case in Australia.

Let’s see what Oxford has to say about journalism: 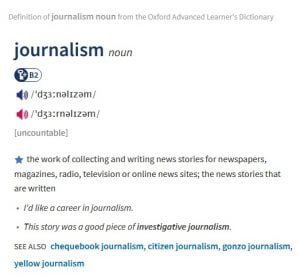 Journalism has been dying a slow and agonisingly painful death where now it only exists as ‘technically’ described by ye ol’ Oxford.

The term people’s paper should be understood with reference to a publication by a communist government, such as Pravda or Xinhua News Agency of Russia and China respectively.

Australia had the working man’s paper, the white collar paper and the left’s publication or the ‘people’s’ news that being the ABC (Australian Broadcasting Corporation).

In the world of journalism much has changed over the past two years, thanks to a triggering event.

Censorship has become rampant, both on the field (‘official’ news agencies) and off (social media).

Social media moguls have install algorithms that when an ‘account’ holder’s post is to contain these words, that person’s post will not be published as it breaches ‘community standards’ or at best the post will be limited in its propagation.

So, ‘free speech’ is DEAD, gone and never to return to ‘back to normal’, as once these algorithms are installed, they will never be removed.

In Australia, news outlets are under ‘dictation’ from those in government, pretty much literally and now officially.

Before it was through licencing.

But now it’s being on the payroll.

Now the government has handed out tax concessions to the ‘news’ publishers, meaning they are in the pockets of those in government.

And no one says anything.

No one says ‘conflict of interest’.

No media outlet writes about it of course.

The mainstream media in now ‘officially’ in the hands of the sadist and sociopaths in control of the colony called Australia.

In reality ALL publications in the colony are the ‘people’s paper‘, yes even Murdoch’s one

And the sheep will sleep.