The colony’s Prime Minister, Scott Morrison broke the law, where he must be taken to court.

What happens when you (the serf) break the law?

If someone from the serf pool breaks the law and that action is made ‘public’ for example social media, or in the news, then the appropriate police force (federal/state) moves in to charge that person.

Well, the ‘lovable’ #ScottyFromMarketing broke the law and the police, the AFP (Australian Federal Police) in this case stood by idly.

It seems that they’re enabling his criminal actions.

So what are they?

Civil conscription, AGAINST the Constitution, or more specifically Section 51 (xxxiiiA).

The general practitioner’s case states that the government cannot provide ANY legal or practical compulsion (i.e. law (Act), directive, ‘rule’) for you to accept a medical procedure.

This means the Commonwealth CANNOT write any law to impose immunisation/vaccination upon the people of Australia, yet this is what Scott Morrison stated publicly he did.

What about the states?

Well, the government of Western Australia states that it can do the opposite, i.e. make a law that states that people MUST succumb to a particular medical procedure irrespective of consent.

According to the Constitution, Section 109 is in force.

Therefore ANY law that the state produces which is inconsistent with federal law is INVALID, and must be ignored.

Take note of Clause 5 of the Constitution: 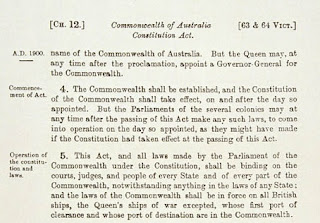 The Constitution is binding on all courts judges and people of every state, meaning irrespective of what law people in state governments ‘approved’ it CANNOT be in conflict with the Constitution.

Please note that the implementation of the Commonwealth tracing app and the various state named tracing apps, where a person is compelled to use them is an unlawful directive.

Breach of the Privacy Act, Section 94H, as well as other protections in Australia’s consumer law come to mind.

Another part of Victorian law that must adhered to is human rights, under the SARC (Scrutiny of Acts and Regulations Committee), where all the checks and balances must take place.

“The Charter of Human Rights and Responsibilities Act 2006 provides that the Committee must consider any Bill introduced into Parliament and must report to the Parliament whether the Bill is incompatible with Human Rights.”