Irrespective of which side is in power, left or right, Labor or Liberal, Australians are still under a fascist régime.

The government is limiting their online ‘free’ speech, if it was ever available in the first place.

It’s a federal government organisation, as defined by it’s Act:

where its employees are commonwealth ones, subject to various law but not limited to:

Since the ABC’s funding comes out of consolidated revenue and not ‘commercials’, it’s basically the government’s mouthpiece.

It’s not a blue or white collar worker publication but rather a passive aggressive left cesspit.

Social media is a powerful tool, where it may seem that it’s out of reach by the ever so powerful ‘inciters’, the mainstream media, but the social media moguls still limit free speech via their own government supported catch phrases.

So, the ABC has now taken censorship to a new level where pretty much straight after publishing a story on social media it shuts down comments, as seen in the above screen capture 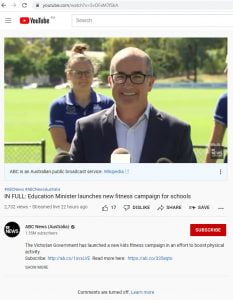 Q: How much do the Australian ‘mum and dad’ taxpayers pay per year to the media conglomerate to keep their voices silenced?

A: Approximately $1 billion per year.

Even though one person may have been able to sneak in a comment, it’s even worse on the video sharing platform, where the ABC does not allow anyone to comment from the millisecond the post is live.

As Tucker Carlson said on another topic, Australians are putting up with this?

While the people in government may want to use all sorts of communist inspired tactics on the general population, what’s worse is that people are accepting of this.

Australian’s shame on you!