This video, building on the ideas of Ernest Becker, Kierkegaard, Nietzsche and Emerson, examines why we are so susceptible to conformity and looks at why nonconformity, or the cultivation of one’s uniqueness, is such an important ingredient in a life well-lived. 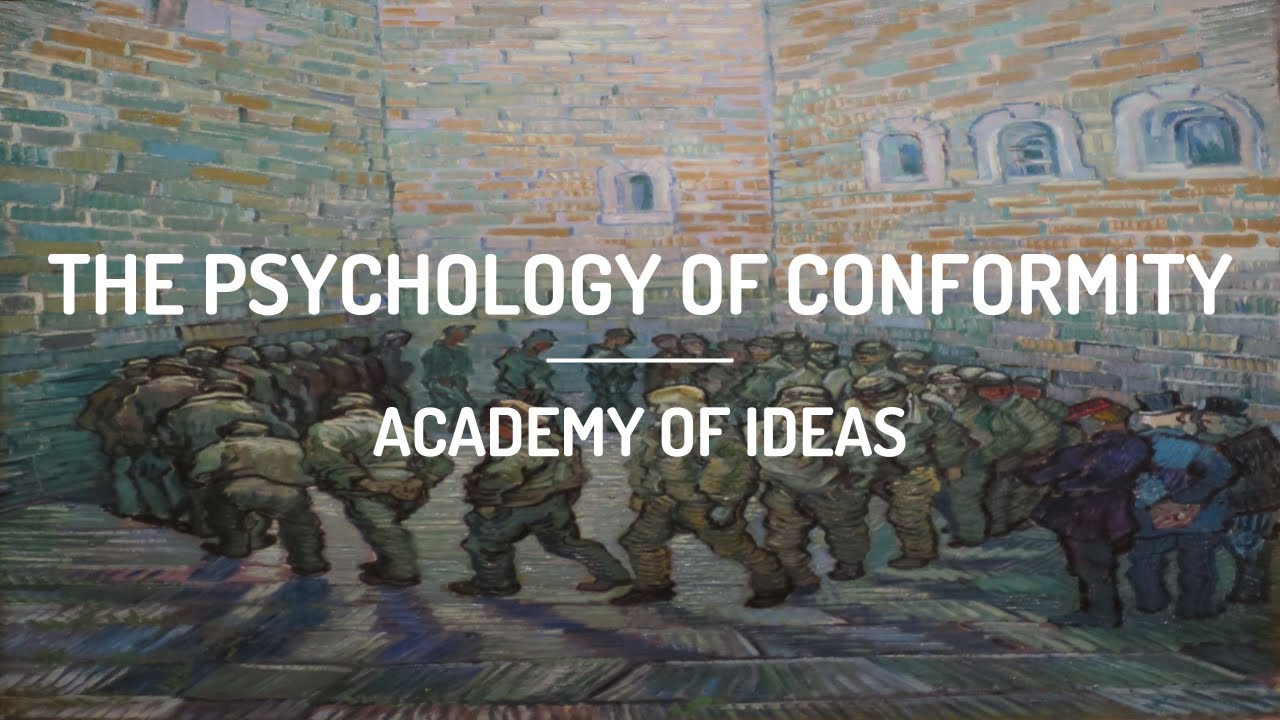 This remark by Ralph Waldo Emerson makes it clear that the forces of conformity were quite strong when he lived nearly 200 years ago. However, he would likely be surprised at the extent to which the whipping of nonconformists has now been made possible with the emergence of social media and other mass communication technologies. No longer is conformity primarily enforced by members of one’s community, but rather through online social networks people from all over the world can ostracize, shame, and ridicule those who fail to hold beliefs or display behaviors which are considered socially acceptable.

But this magnified ability to enforce conformity comes at a price as it is the nonconformists who bring forth the new ideas, creations, and ways of living which produce a vibrant society. Furthermore, many who have reflected on the human condition have suggested that too-much conformity deadens the human spirit and that a fulfilling life is one which sees the flowering of one’s uniqueness, not the mimicking of the crowd. The purpose of this video will be to examine why we are so susceptible to conformity and to look at why nonconformity is such an important ingredient in a life well-lived.

While conformity can be defined as the imitation of behaviors, beliefs, and values which are considered socially acceptable, nonconformity, for the purpose of this video, is not merely the rejection of the socially accepted. A person who rejects things just out of the desire to be “different” still conforms as their life, like that of the more typical conformist, is still shaped by an external source, that being the crowd. True nonconformity, in contrast, is displayed to the degree that one’s life path, and thus character, are shaped by behaviors, beliefs, and values which are chosen for personal or authentic reasons. In many cases this will entail the adoption of things considered socially acceptable, but the nonconformist adopts them because they understand their utility, while the conformist adopts them merely out of the desire to be accepted.

While there are numerous forces behind the tendency to conform, some have suggested that the fear of death is one of the most influential factors in this respect. In his Pulitzer prize-winning book The Denial of Death Ernest Becker describes this existential fear as follows:

“This is the terror: to have emerged from nothing, to have a name, consciousness of self, deep inner feelings, and excruciating inner yearning for life and self-expression – and with all this yet to die. It seems like a hoax. . . What kind of deity would create such complex and fancy worm food?” (Ernest Becker, The Denial of Death)

According to Becker we cannot face up to the reality of our death without experiencing debilitating anxiety and so we attempt to quell this anxiety by “denying death”. Denial of death is achieved by what Becker called striving for the heroic, or in other words attaching ourselves to a purpose, cause, or creation which we believe will outlive our physical existence, thus granting us a form of immortality. There are two main paths to heroism, the path of the nonconformist, or what Becker calls cosmic or personal heroism, and the path of the conformist, which he calls cultural heroism.

The path of the nonconformist consists of cultivating one’s unique potential and using one’s talents and skills in the creation of something novel and meaningful.

“What is one’s true talent, his secret gift, his authentic vocation?” writes Becker “In what way is one truly unique, and how can he express this uniqueness, give it form, dedicate it to something beyond himself?” (Ernest Becker, The Denial of Death)

In creating something which will in a sense live on past one’s physical existence and which is the expression of one’s uniqueness, be it a work of art, a scientific discovery, or an entrepreneurial endeavor, one’s life, according to Becker, will be characterized by a form of personal heroism. This personal heroism helps one deny death in a manner conducive to psychological health and vitality.

However, by the time most of us reach adulthood we have been inculcated to view our uniqueness not as something to be cultivated, but as something to be shunned. Very few people view themselves as capable of bringing forth anything of significance into the world and so are incapable of engaging in personal heroism. For such people, an alternative route to the denial of death is required, or else they run the risk of being overwhelmed by anxiety and nihilistic despair. This alternative is found through conformity and the adoption of pre-determined social roles, or what Becker calls cultural heroism. While this path limits the expression of one’s uniqueness and leads to a life dominated by repetition and routine, it provides people with security and comfort, and makes them feel as if they are participating in something significant. Or as Becker explains:

“Like many prisoners they are comfortable in their limited and protected routines, and the idea of a parole into the wide world of chance, accident, and choice terrifies them. In the prison of one’s character one can pretend and feel that he is somebody, that the world is manageable, that there is a reason for one’s life, a ready justification for one’s action. To live automatically and uncritically is to be assured of at least a minimum share of the programmed cultural heroics . . .”(Ernest Becker, The Denial of Death)

Becker makes the interesting claim that cultural heroism is effective due to the religious function that modern secular societies play in the conformist’s life. In other words, just as Christianity in the Middle Ages provided those in the West with a meaning to their existence and a set of values by which to shape their lives, in our more secular world one’s society now plays such a role. As Becker explains:

“Society itself is a codified hero system, which means that society everywhere is a living myth of the significance of human life, a defiant creation of meaning. Every society thus is a “religion” whether it thinks so or not: Soviet “religion” and Maoist “religion” are as truly religious as are scientific and consumer “religion,” no matter how much they may try to disguise themselves by omitting religious and spiritual ideas from their lives.” (Ernest Becker, The Denial of Death)

Just like any religion, the religion of one’s society becomes easier to believe in, the greater the number of people to whom worship it. And this is why the nonconformists are so feared by the masses, the unique individuals plant seeds of doubt into the minds of the conformists regarding the significance of their social roles, and thus the significance of their very existence. Therefore, the masses actively discourage the cultivation of one’s uniqueness, ridicule and ostracize nonconformists, and try and pressure them back to conformity – something they must do given that their existential significance is on the line.

While there exist great pressures to conform, of the two paths to heroism, the one less traveled, or the cultivation and expression of one’s uniqueness, has long been seen as the superior of the two, for as Emerson wrote:

“Whence is your power? From my nonconformity. I never listened to your people’s law, or to what they call their gospel, and wasted my time.” (Ralph Waldo Emerson)

The conformists’ existence, while comfortable, is largely a robotic state. Such people are always looking to others in order to determine how to behave and what to believe. Thus in effect, conformity amounts to living one’s life for others – not for oneself – and as Virginia Woolf recognized:

“Once conform, once do what other people do because they do it, and a lethargy steals over all the finer nerves and faculties of the soul. [One] becomes all outer show and inward emptiness; dull, callous, and indifferent.” (Virginia Woolf)

This stultifying effect of conformity led Kierkegaard to stress the importance of striving to follow a life path which is personally chosen – as a conformist’s existence can barely be called living at all. In his work Concluding Unscientific Postscript to Philosophical Fragments he suggests that cultivating one’s uniqueness is like “riding a wild stallion”, while conforming is like “falling asleep on a moving hay wagon”. But like Becker, Kierkegaard realized that few people are capable of cultivating their uniqueness, for as he wrote:

“Surrounded by hordes of people, busy with all sorts of secular matters, more and more shrewd about the ways of the world – such a person forgets himself, forgets his name divinely understood, does not dare to believe in himself, finds it too risky to be himself, far easier and safer to be like the others, to become a copy, a number, part of the crowd.” (Soren Kierkegaard, The Sickness Unto Death)

But while most people conform almost without reflecting on why they do so, others have a nagging feeling that there is more to life than the social role they have adopted. They sense that in the short time they have between two eternal darknesses they should strive to cultivate their uniqueness and to see what they are personally capable of. But even with this awareness why are so few people capable of breaking the powerful chains of conformity?

In other words, While Becker may be correct that our fear of death impels us to strive for the heroic, why is it that so many people choose the path of conformity instead of the far superior path of the nonconformist to achieve the denial of death? While numerous thinkers have attempted to pinpoint what makes it so difficult to be a nonconformist, Nietzsche, in his book Untimely Meditations, suggested that the rarity of the nonconformist can be explained by a specific character flaw which afflicts the vast majority of us:

“A traveler who had seen many countries, peoples and several of the earth’s continents was asked what attribute he had found in men everywhere. He said: “They have a propensity for laziness.” To others, it seems that he should have said: “They are all fearful. They hide themselves behind customs and opinions.” In his heart every man knows quite well that, being unique, he will be in the world only once and that there will be no second chance for his oneness to coalesce from the strangely variegated assortment that he is: he knows it but hides it like a bad conscience – why? From fear of his neighbor, who demands conformity and cloaks himself with it. But what is it that forces the individual to fear his neighbor, to think and act like a member of a herd, and to have no joy in himself? Modesty, perhaps, in a few rare cases. For the majority it is idleness, inertia, in short that propensity for laziness of which the traveler spoke. He is right: men are even lazier than they are fearful.” (Nietzsche, Untimely Meditations III)