Another piece US anti-Ivermectin puzzle may have emerged. On Monday, Pfizer announced that it’s launching an accelerated Phase 2/3 trial for a COVID prophylactic pill designed to ward off COVID in those may have come in contact with the disease.

Coincidentally (or not), Pfizer’s drug shares at least one mechanism of action as Ivermectin – an anti-parasitic used in humans for decades, which functions as a protease inhibitor against Covid-19, which researchers speculate “could be the biophysical basis behind its antiviral efficiency.”

Lo and behold, Pfizer’s new drug – which some have jokingly dubbed “Pfizermectin,” is described by the pharmaceutical giant as a “potent protease inhibitor.”

That’s exactly what ivermectin, the prophylactic used for a number of reasons in both humans and animals, does. And unlike Pfizer’s experimental drug, ivermectin already may have saved hundreds of thousands of lives from India to Brazil.

We aren’t the only ones to have put this together, as twitter users have commented on the similarities. The timing – which coincides with the whole “horse dewormer” smear campaign – just seems odd.

The similarity between Pfizer’s upcoming offering and Ivermectin has not gone unnoticed.

In other news, Pfizer is testing Ivermectin, now renamed PF-07321332, to help with Covid. They have done this so they can make this drug more expensive than Ivermectin, despite the fact, they are the same drug…..

But Pfizer, Moderna and their executives have already shown the world with their actions that they see COVID as “manna from heaven” – to quote legendary defence attorney Johnny Cochran –  a new ‘profit centre’ that will keep shareholders in butter brickle, especially since the companies have quietly raised prices on their vaccines. 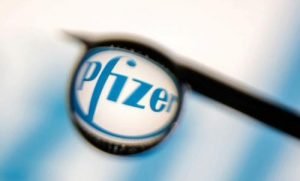 According to Reuters, Pfizer said on Monday it has “started a large study testing its investigational oral antiviral drug for the prevention of COVID-19 infection among those who have been exposed to the virus.”

Pfizer isn’t the only drugmaker hoping to develop a prophylactic treatment for COVID exposure (especially since variants raise the possibility that vaccinations just might not be enough). Merck and Swiss rival Roche have been racing to develop an easy-to-administer antiviral pill of their own – so the clock is ticking for Pfizer.

Reuters explains that the mid-to-late-stage study will test the Pfizer drug’s – known as PF-07321332 ability to prevent COVID symptoms in up to 2,660 healthy adult participants aged 18 and older who live in the same household as an individual with a confirmed symptomatic COVID infection.

The drug, designed to block the activity of a key enzyme needed for the coronavirus to multiply inside the human body, will be administered along with a low dose of ritonavir, an older medication widely used in combination treatments for HIV infection.

At present, Gilead’s much-hyped but not-all-that-effective IV drug remdesivir is the only approved antiviral treatment for COVID in the US. Several antibody cocktails have also been widely tested and trials are ongoing – including Merck and partner Ridgeback Biotherapeutics, which recently launched a late-stage trial for experimental COVID prophylactic, molnupiravir.

In the mean time, concerned citizens should keep an eye out for any new information about Ivermectin – if you can find it.

As Governments and health bureaucrats claim ‘’there’s not enough evidence’’?