‘Chem-trails’ is often referred to by many as a hoax or a tin foil hat conspiracy theory.

But that is just another attempt by bad actors to conceal the truth from the public.

While one can search for the US government’s admission on using chem-trails in Vietnam, there is a much easier way.

Chem-trails/geoengineering/Rain-making made its way into law in Victoria, Australia in 1967. 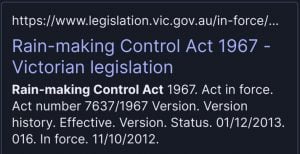 You can find the law in the Victorian government’s official legislation page within the following link:

With regards to Australia, a newspaper article by The Sydney Morning Herald from 17th of January 1948 can been seen mentioning the ‘Rain-maker’: 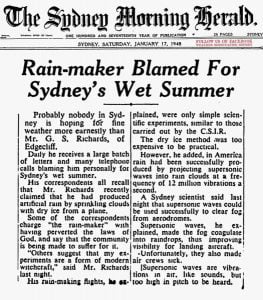 In the colony’s motherland an article mentions how a researcher lifts the lid on weather manipulation: 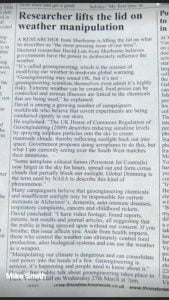