In reality the liquid cannot be classified as a ‘vaccine’ as it does not confer immunity.

It is well established that certain sectors of society are at far greater risk from Covid-19 than other sectors. Having co-morbid conditions is the most important risk and older age is the most widely used proxy for comorbidities. Persons with obesity, diabetes, and cardiac disease are at a much higher risk; residents of long-term care facilities who are 1 percent of the population represent 35 percent of all Covid-19 deaths; and, per the CDC, the mortality rate of persons over 65 is more than 80 times greater than for persons under 30. The healthy young and middle age are at a statistical zero risk of death. In addition, the more recent Omicron strain is even milder, and typically clinically indistinguishable from the common cold.29 Vast sectors of society are at extraordinarily low risk from the virus.

There is no evidence to support the argument that the Covid-19 Recovered lose their immunity. In fact, there is substantial evidence suggesting it will be lifelong. Such evidence includes: University of Washington scientists discovered that prior infection with the original SARS-CoV-1 (which is approximately 78 percent identical to SARS-Cov-2) conferred natural immunity that is robust against the current SARS-CoV-2 eighteen years later; The Lancet reports that “infection does protect against reinfection;” SCIENCE reports: “Substantial immune memory is generated after natural infection with COVID-19, involving all four major types of immune memory”; and Nature reports: “SARS-CoV-2 infection induces long-lived bone marrow plasma cells in humans.”

In December 2021, this number exceeds 200 million people. The OSHA ETS, however, fails to account for the more than 50 percent of the population that is now naturally immune. Far from being narrowly tailored, it is ludicrously overbroad. In addition, OSHA fails to consider the damage done to those naturally immune people forced to take the injections, who are placed at greater risk of harm from the injections in both the short term and the long term.

But that was a digression.

On the 21st of February 2021, it was stated on Australian Government’s, Department of Health website, by Mr. Gregory Andrew Hunt that:

“The world is engaged in the largest clinical trial, the largest global vaccination trial ever, and we will have enormous amounts of data.” 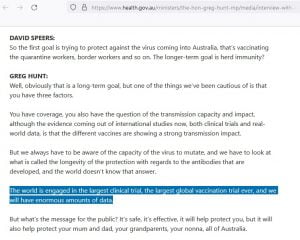 Therefore Australians are also part of this ‘trial‘, till today.

But that was another digression.

See the above pictured article within the publication: