The headlines are screaming with panic over the impending doom of the Delta variant hitting the U.S.:

And of course, no list would be complete without the headline from Dr. Fauci yesterday, stating that the “Delta variant is the greatest threat in the US.”

The implication from these headlines is that somehow this variant is truly more transmissible and deadly (as the previous variants were falsely portrayed to be), they escape natural immunity and possibly the vaccine — and therefore, paradoxically, you must get vaccinated and continue doing all the things that failed to work for the other variants!

After each city and country began getting ascribed its own “variant,” I think the panic merchants realized that the masses would catch on to the variant scam, so they decided to rename them Alpha (British), Beta (South African), Gamma (Brazilian), and Delta (Indian), which sounds more like a hierarchy of progression and severity rather than each region simply getting hit when it’s in season until the area reaches herd immunity.

However, if people would actually look at the data, they’d realize that the Delta variant is actually less deadly. These headlines are able to gain momentum only because of the absurd public perception that somehow India got hit worse than the rest of the world. In reality, India has one-seventh the death rate per capita of the U.S.; it’s just that India got the major winter wave later, when the Western countries were largely done with it, thereby giving the illusion that India somehow suffered worse. Now, the public health Nazis are transferring their first big lie about what happened in India back to the Western world.

Fortunately, the U.K. government has already exposed these headlines as a lie, for those willing to take notice. On June 18, Public Health England published its 16th report on “SARS-CoV-2 variants of concern and variants under investigation in England,” this time grouping the variants by Greek letters.

As you can see, the Delta variant has a 0.1% case fatality rate (CFR) out of 31,132 Delta sequence infections confirmed by investigators. That is the same rate as the flu and is much lower than the CFR for the ancestral strain or any of the other variants. And as we know, the CFR is always higher than the infection fatality rate (IFR), because many of the mildest and asymptomatic infections go undocumented, while the confirmed cases tend to have a bias toward those who are more evidently symptomatic.

In other words, Delta is literally the flu with a CFR identical to it. This is exactly what every respiratory pandemic has done through history: morphed into more transmissible and less virulent form that forces the other mutations out since you get that one. Nothing about masks, lockdowns, or experimental shots did this. To the extent this really is more transmissible, it’s going to be less deadly, as is the case with the common cold. To the extent that there are areas below the herd immunity threshold (for example, in Scotland and the northwestern parts of the U.K.) they will likely get the Delta variant (until something else supplants it), but fatalities will continue to go down.

According to the above-mentioned report, the Delta variant represented more than 75% of all cases in the U.K. since mid-May. If it really was that deadly, it should have been wreaking havoc over the past few weeks. 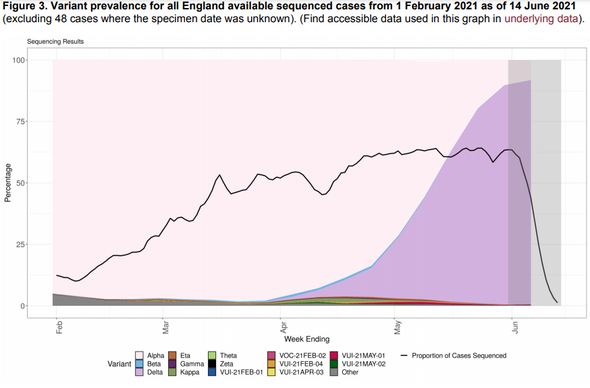 You can see almost a perfect inverse relationship between hospitalization rates throughout April and May plummeting as the Delta variant became the dominant strain of the virus in England. Some areas might see a slight oscillation from time to time as herd immunity fills in, regardless of which variant is floating around. However, the death burden is well below that of a flu season and is no longer an epidemic.