SUMMARY from the UK Gov report: 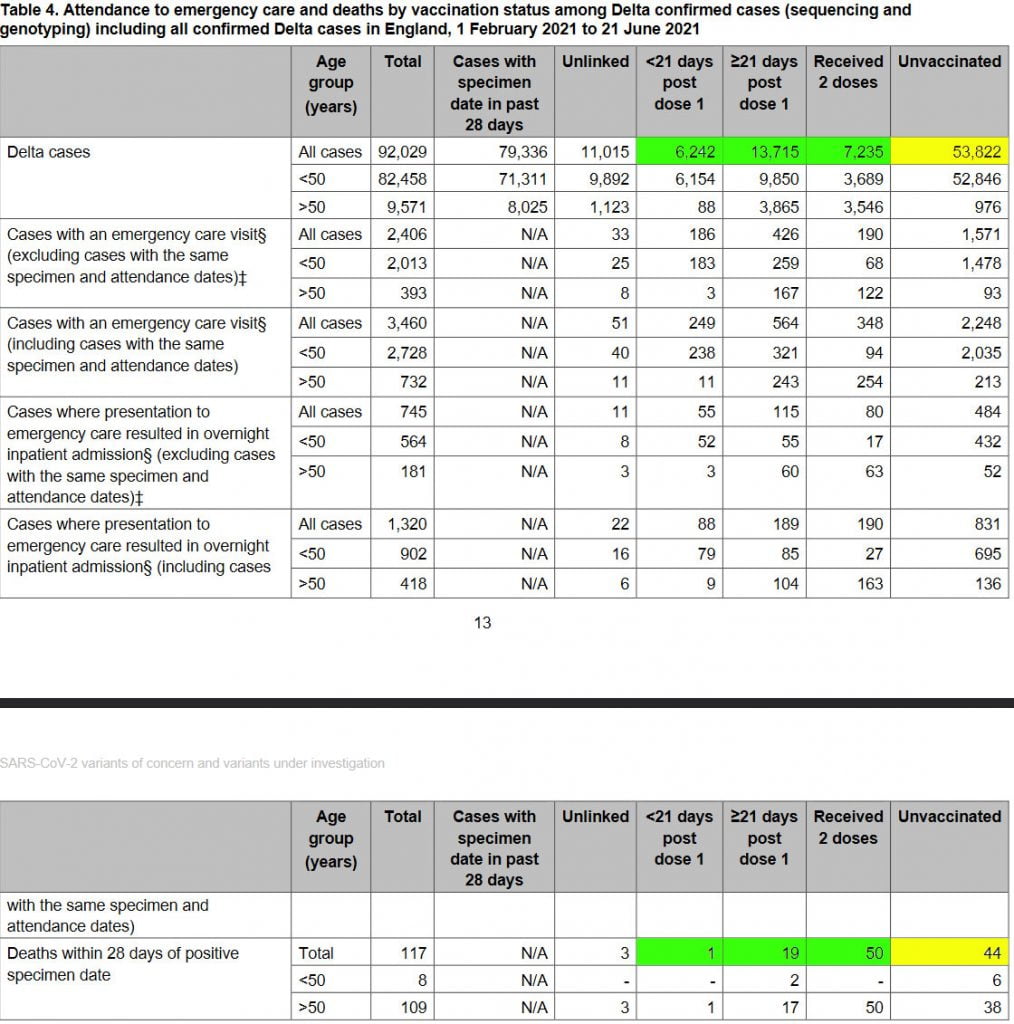 This ‘article’ says why most people who now die with COVID in England, have been vaccinated yes this is the title!
The authors are now trying to explain to the readers out there why you’re dying even though you’ve had two shots of  the supposed vaccines (that is supposed to stop you from dying)
They’re trying to make this sound like it’s normal and is as expected?
” it could sound worrying that the majority of people dying in England with the now dominant delta variant have been vaccinated does this mean the vaccines are ineffective far from it is what we would expect from an effective but imperfect vaccine a risk profile that varies hugely by age and the way the vaccines have been rolled out”
They’re making out basically that now because so many people have had the jab in the UK that of course statistically there most people who die will now be jabbed this is OK
The Government statistics from only two days prior prove this as wrong!

MailOnline headline on 13 June read: “Study shows 29% of the 42 people who have died after catching the new strain had BOTH vaccinations.” In Public Health England’s technical briefing on 25 June, that figure had risen to 43% (50 of 117), with the majority (60%) having received at least one dose.

It could sound worrying that the majority of people dying in England with the now-dominant Delta (B.1.617.2) variant have been vaccinated. Does this mean the vaccines are ineffective? Far from it, it’s what we would expect from an effective but imperfect vaccine, a risk profile that varies hugely by age and the way the vaccines have been rolled out.

Consider the hypothetical world where absolutely everyone had received a less than perfect vaccine. Although the death rate would be low, everyone who died would have been fully vaccinated.

The vaccines are not perfect. PHE estimates two-dose effectiveness against hospital admission with the Delta infections at around 94%. We can perhaps assume there is at least 95% protection against Covid-19 death, which means the lethal risk is reduced to less than a twentieth of its usual value.

But the risk of dying from Covid-19 is extraordinarily dependent on age: it halves for each six to seven year age gap. This means that someone aged 80 who is fully vaccinated essentially takes on the risk of an unvaccinated person of around 50 – much lower, but still not nothing, and so we can expect some deaths.

The PHE report also reveals that nearly a third of deaths from the Delta variant are of unvaccinated people over 50, which may be surprising given high vaccine coverage; for example, OpenSAFELY estimates more than 93% among the 65-69s. But there are lower rates in deprived areas and for some ethnicities and communities with limited coverage will continue to experience more than their fair share of loss.

Coverage and effectiveness are important numbers for assessing vaccination programmes. It is better to look at cool analysis by analysts, rather than hot takes on social and other media.