According to the PM’s website Scott Morrison was allegedly sworn in to office on the 24th day of August 2018, as the 30th Prime Minister of Australia.

So, what is this ‘oath’ or affirmation, and where is it described?

Australia’s founding legal document, the Constitution is the place where one can find the oath or affirmation. 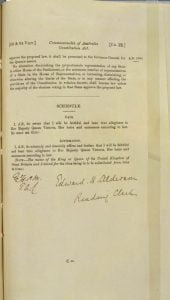 The transcription of the above is as follows:

I, A.B., do swear that I will be faithful and bear true allegiance to Her Majesty Queen Victoria, Her heirs and successors according to law.

I, A.B., do solemnly and sincerely affirm and declare that I will be faithful and bear true allegiance to Her Majesty Queen Victoria, Her heirs and successors according to law.

(NOTE.—The name of the King or Queen of the United Kingdom of Great Britain and Ireland for the time being is to be substituted from time to time.)

Who was Australia’s first Prime Minister and what was his oath?

After federation, Sir Edmund Barton was the first Prime Minister of the “Commonwealth of Australia”. 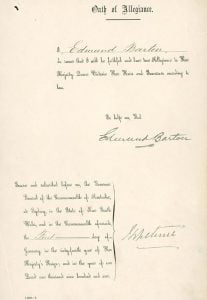 The oath that he took, transcribes to the following:

“I Edmund Barton, do swear that I will be faithful and bear true Allegiance to Her Majesty Queen Victoria Her Heirs and Successors according to law?

This is in line with the words from the Constitution.

How is a Prime Minister appointed?

The prime minister of Australia is appointed by the governor-general of Australia under Section 64 of the Australian Constitution,  which means the oath/affirmation must be taken from the last section of the Constitution, that being the Schedule.

What lawfully enacted instrument allows for the change of the oath or affirmation into office?

Since the current so called Prime Minister’s oath does not align with the Constitution, in which lawfully enacted document are the words written with regards to what he stated?

The words that he said were as follows:

“I Scott John Morrison, do swear that I will well and truly serve the people of Australia, in the office of the Prime Minister and I will be faithful and bear true allegiance to Her Majesty Queen Elizabeth the Second, Queen of Australia, so help me God”.

They are not the words required as per the Constitution, period.

If ‘you’ (the serf) do not state the correct oath/affirmation in court, you cannot proceed with the information you desire to present, your words/testimony/actions cannot be taken into consideration.

It was also revealed that in Tasmania the judiciary’s oath of office was incorrect for 30 years, therefore at law, their orders had no lawful standing, but the effected people did not seek to obtain a remedy from this fraudulent action.

Mr. Scott John Morrison has no lawful standing as Prime Minister of Australia.

The ‘journalists’ have not brought this to the attention of the general population, where even so called ‘constitutional experts’ are silent on this.

What a pathetic farce this colony Australia really is!

What lawfully enacted instrument allows for the creation of such an entity?